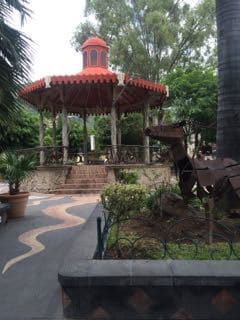 We are currently on the road, visiting family and friends in Mexico. First stop: Ajijic.

Ajijic is a small town in Jalisco, on the shore of Lake Chapala–Mexico’s largest lake. Lake Chapala has a huge expat community (one estimate says over 40,000!) mostly from Canada and the US. Many are snowbirds who live in the area part time, escaping the cold winters back home. We’re told that the season starts mid-October, so things are pretty quiet here now.

It’s pretty easy to get to Lake Chapala from Guatemala since the Mexican airline Volaris recently began non-stop service from Guatemala City to Guadalajara. From the Guadalajara airport, it’s an easy 35 minute drive to Ajijic.

One of our priorities when coming to a new place is finding vegan eats. We hit the jackpot today at a funky and friendly restaurant called Just Chillin’. The restaurant is owned by three enterprising young Mexicans (and, a few months after this was written, they moved the restaurant to Cozumel). As you walk in, you’re greeted with a hug or two. The decor is fun, and the atmosphere very casual. Best of all, when I asked about vegan options, I got the complete rundown of everything that could be made vegan. That gets high marks in my book.

We opted for the veggies fajitas. The dish is a delightful, colorful mix of onions, peppers, spinach and mushrooms, served with beans, guacamole, and fresh corn tortillas. It was the best meal we’ve had since we left Lake Atitlan.

We also indulged in a margarita with Grand Marnier. Yum. Yes, that’s vegan too!