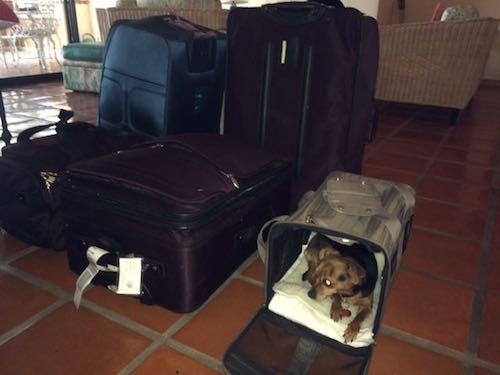 Let me start by saying that of the five times I’ve flown Volaris, it was this last trip and subsequent follow-up that put the airline in my Evil category. Let me also say that you may never have this kind of experience with them and you may happily save money with no problems at all. I’ve travelled on many airlines, and have never before had experiences this bad.

If you’re not familiar with Volaris, they’re a low-cost Mexican airline. People call them the Mexican version of Spirit. The base fare is low, but you pay for everything except one checked bag and two personal items. Most of the add-ons are reasonably priced if you add them in advance on their website.

For example, a personal item is smaller than a regular carry-on bag. My wheeled overnight bag is 20″ tall: though most airlines consider a bag that size to be a free carry-on, Volaris considers it paid luggage. I paid about $14 to add a carry-on bag. If you don’t pay close attention to the size requirements and you try to carry on such a bag without prepaying, they’ll charge you $45 at the airport. I’ve seen lots of grumpy people at the Volaris counter who didn’t understand how this works.

There is no free food or drink. Even water will cost you. And, yes, you pay if you want to select your own seat.

As long as you plan for these charges or don’t need the services, you can fly dirt cheap. My best deal was $89 for a flight from Guadalajara to Guatemala City. Besides the cost, I fly Volaris because they have the only direct flight between Guadalajara and Guatemala City. Even with the annoyances of the airline, I prefer two hours of travel to the seven hours required for the next-best route.

Were the Flights Really So Bad?

My first flight, in September, was fine. I even recommended Volaris to friends.

Second Flight: Christmas day. It was okay except that the person in front of me had his seat all the way back the entire time; the flight was full and there was nowhere to run. The regular seats are very tight for someone my height, so it was a pretty miserable two hours. Note to self: upgrading for more legroom is not optional for me.

Third flight, traveling with my dad:  I upgraded both dad and myself to the front row. He had the window and I had the aisle seat. What I didn’t know was that they put the wheelchair passengers in the front row. The woman they put between us was so huge, I literally could not sit in my seat because she spilled into it. Dad was also crunched and very uncomfortable. I ended up moving back a couple rows and not being able to take advantage of the legroom I paid for.

They also had no food service on this flight: no beverages or snacks offered for sale at all—I couldn’t even buy a bottle of water. No reason given.

When I received the “tell us how you liked your flight” email, I went to their website to tell them what I didn’t like. When I clicked the button to submit the form, it cleared the form instead. Nice complaint procedure!

Fourth flight: I learned my lesson and upgraded to the exit row. The plane was nearly empty, but at least I had legroom. It was the best of the five flights.

Fifth flight: The day of evil begins. After 10 difficult days of packing up my dad’s stuff, I was bringing six suitcases and his little dog, Amitu, with me to Guatemala. I’ve never travelled with a pet, so I asked several people for advice. I triple-checked the requirements on the Volaris website and even called Volaris to see whether I might be missing anything. I asked the vet, who regularly deals with pets going from Mexico to the US and Canada. I called the Guatemalan Consulate’s office in Guadalajara to see whether they needed to sign off on the health certificate. Based on all information I could find, we were good to go.

Here is the requirement for a pet health certificate on the Volaris website:

Animal sanitary/health certificate (original and copy), expedited by a veterinarian, with validity for at least 5 days before the departing flight. In case you come back after the 5 days, you must present a new certificate that complies with the validity period.

I had the health certificate completed by Amitu’s vet as required, and I had her vaccination records. When I got to the Volaris counter, they told me I also needed a sanitary certificate. Huh. I thought that was the same as the health certificate. No, you have to go to a government window on the other side of the airport, where a vet checks the pet on-site. Unfortunately, there is no vet on Sunday. Another family in exactly the same situation shook their heads in disbelief.

I went back to the Volaris counter and told them nobody was there to issue a sanitary certificate. The clerk made many trips to a back room, consulted with others, and—she told me–called the Guatemala airport. She said that my paperwork met the the airline’s requirements, but that the additional certificate was an airport requirement. Oh, and there wouldn’t be anyone there to issue that certificate until Friday (this was Sunday).

“How would I know about this requirement?” I asked. The four people behind the counter looked at one another and shrugged. One said “It’s on our website.” No. It isn’t. Trust me. They told me Amitu would not be accepted in the Guatemala airport without the sanitary certificate. I told them I would take that chance and deal with the officials in Guatemala. Still, they absolutely would not allow Amitu on the plane. Sorry ma’am. Those are the rules. All of this took over two hours.

Fortunately, the people who had been helping me close out my dad’s house stayed with me at the airport through all of this. They had taken care of Amitu before. They made an appointment to get the sanitary certificate on Friday and took Amitu home with them. I flew to Guatemala with plans to return to bring Amitu on the next possible flight—next Sunday.

While at the airport, I asked whether I would get a credit for the $100 I already paid to take Amitu on board. The staff told me I would need to call Customer Service and they would issue a voucher to apply to the next flight.

This morning it took six calls and at least an hour on hold before I finally reached someone in Customer Service. Each time I had to explain the situation and have the support rep review the notes…again. Four of the calls ended suddenly after I’d been on hold for 15 minutes. Eventually I reached the real customer service department, and they quickly agreed to issue a voucher for pet-on-board fee–but it wouldn’t be issued until after I needed to book my next flights. Sorry, ma’am. Those are the rules.

One of the other “features” of Volaris is that you pay to pick your assigned seat. I had already paid for an upgrade to an exit row, but then had to change because you can’t be in an exit row with a pet. They charged me for both the exit row upgrade and the “pet-appropriate” seat, but then didn’t let me take the exit row seat when Amitu couldn’t come with me. When I told the Customer Service rep about the double charge, he said they would look into whether I should receive a voucher for that. Sorry, ma’am. Those are the rules.

Now, I know that many factors made this whole experience feel much worse than it otherwise might have: I’ve been moving my dad in with me after his partner of 50 years died in December; I’ve dealt with some incredibly unsavory and unscrupulous characters in closing out my dad’s house in Mexico; I’ve only seen my husband four days out of the past six weeks (no, Skype doesn’t count!)

The day before I was supposed to fly back to Guadalajara to pick up Amitu, I found out that she needed yet another vaccination (a new requirement) and wouldn’t be allowed to fly for two weeks. Okay, Volaris allows you to change your reservation online. Oh, but wait: the change feature wasn’t working properly and kept giving error messages.

I called Customer Service yet again, and this time talked with the only person at Volaris who has been truly helpful. She changed my reservation for me, but charged me double what it would have cost to change the reservation online…if the feature had been working.

And, two weeks later, Volaris has still not issued the voucher for the pet-on-board fee.

Update: On Feb 28, I finally brought Amitu home to Guatemala. It took another six hours in the airport and a weekend in Guadalajara. Volaris has still not issued the voucher, but at least I got her on the plane!